And, yes, it happened. It did. Pursuing further on the somewhat “alternative” course that begun last year with Svetlana Alexievich’s Nobel for Literature, the Swedish Academy made an even greater leap forward: as of today, Bob Dylan is a Nobel Laureate. A long expected vindication for his fans (like us) – with no “buts”, none whatsoever. Still, there’s a lot of complaining going around: “How is this even possible?” “The Nobel Prize? To a songwriter? To a lyricist?”

Well. Yes. Despite their poetic flavor, Bob Dylan’s “words” are still “just” the lyrics of songs, meaning they do not exist per se, outside the formal structure known as “song”. But isn’t it the same case with the theatrical texts? Aren’t they written in order to exist within a specific art form, i.e. the theatrical play, which is something altogether different than the text itself? The Academy has awarded the Prize to playwrights 11 times until today — to  Eugene O’Neill, Samuel Beckett and Harold Pinter, to name a few. In the same sense exactly, the “words” of a lyricist can also stand self-sufficiently as a body of work – and win the Award. Lyrics and plays, as written text, as literary endeavors, are still Art; they too flow into the great pool of Literature – and this is exactly Dylan’s contribution to which the Swedish Academy referred in its statement regarding this year’s wonderfully surprising choice.

Because, yes, Dylan has been serving Art for almost 55 years now, and better than anyone else in this job. So, maybe, we shouldn’t feel too astonished if, next year, we see a movie or even a TV screenwriter winning the award. True, the times they are a-changin’. And it seems that the Swedish Academy is keeping up with them much better than purists of all sorts.

[Translated from greek by Margarita Zachariadou]

The Times They Are a-Changin’

Come gather ’round people where ever you roam
And admit that the waters around you have grown
And accept it that soon you’ll be drenched to the bone
If your time to you is worth savin’
Then you better start swimmin’ or you’ll sink like a stone,
For the times they are a’ changin’!

Come writers and critics who prophesy with your pen
And keep your eyes wide the chance won’t come again
And don’t speak too soon for the wheel’s still in spin
And there’s no tellin’ who that it’s namin’
For the loser now will be later to win
For the times they are a’ changin’!

Come senators, congressmen please heed the call
Don’t stand in the doorway don’t block up the hall
For he that gets hurt will be he who has stalled
There’s a battle outside and it’s ragin’
It’ll soon…

Oh, what did you see, my blue eyed son?
And what did you see, my darling young one?
I saw a newborn baby with wild wolves all around it
I saw a highway of diamonds with nobody on it
I saw a black branch with blood that kept drippin’
I saw a room full of men with their hammers a-bleedin’
I saw a white ladder all covered with water
I saw ten thousand talkers whose tongues were all broken
I saw guns and sharp swords in the hands of young children
And it’s a hard, it’s a hard, it’s a hard, and it’s a hard
It’s a hard rain’s a-gonna fall.

And what’ll you do now, my blue-eyed son?
And what’ll you do now my darling young one?
I’m a-goin’ back out ‘fore the rain starts a-fallin’
I’ll walk to the depths of the deepest black forest
Where the people are a many and their hands are all empty
Where the pellets of poison are flooding their waters
Where the home in the valley meets the damp dirty prison
And the executioner’s face is always well hidden
Where hunger is ugly, where souls are forgotten
Where black is the color, where none is the number
And I’ll tell and speak it and think it and breathe it
And reflect from the mountain so all souls can see it
And I’ll stand on the ocean until I start sinkin’
But I’ll know my song well before I start singing
And it’s a hard, it’s a hard, it’s a hard, and it’s a hard
It’s a hard rain’s a-gonna fall. 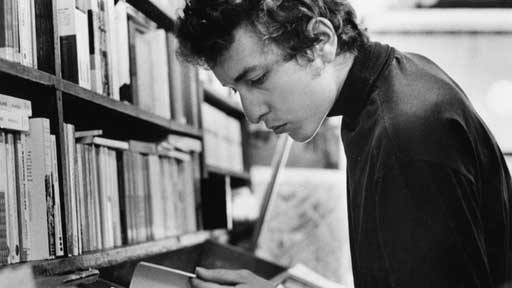 Senor, senor, can you tell me where we’re headin ?
Lincoln County Road or Armageddon ?
Seems like I been down this way before
Is there any truth in that, senor ?

Senor, senor, do you know where she is hidin’ ?
How long are we gonna be riding ?
How long must I keep my eyes glued to the door ?
Will there be any comfort there senor ?

There’s a wicked wind still blowing on that upper deck
There’s an iron cross still hanging down from around her neck
There’s a marcing band still playing in that vacant lot
Where’s she held me in her arms one time and said, Forget me not.

Senor, senor, I can see that painted wagon
Smell the tail of the dragon
Can’t stand the suspense anymore
Can you tell me who to contact here, senor ?

Well, the last thing I remember before I stripped and kneeled

Was that trainload of fools bogged down in a magnetic field
A gypsy with a broken flag and a flashing ring
He said, Son, this ain’t a dream no more it’s the real thing.

Senor, senor, you know their hearts is as hard as leather
Well, give me a minute, let me get it together
I just gotta pick myself up off the floor
I’m ready when you are, senor.

Senor, senor, let’s overturn these tables
Disconnect these cables
This place don’t make sense to me no more
Can you tell me what we’re waiting for, senor ?

This site uses Akismet to reduce spam. Learn how your comment data is processed.