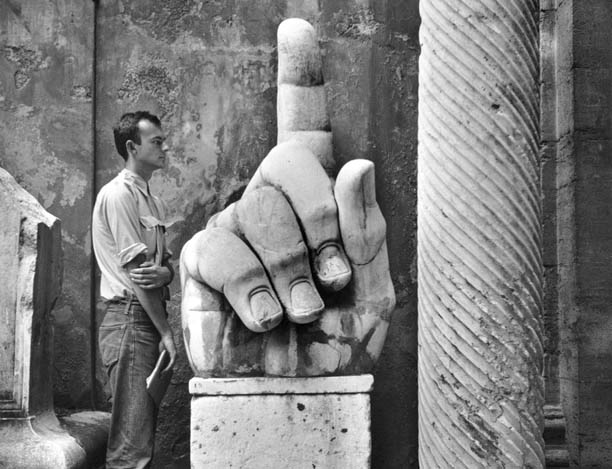 About his work, which has been acclaimed since 1979, Cy Twombly offers little information, admitting that he intentionally ascribes a mysterious power to certain words and images. Influenced by American Abstract Expressionism and Old Word past, the artist came by way of initial process of exploration and investigation to adopt a plastic sensibility that conveys the essence, which is the gesture.

Of course, in no way does his abstract tendency parallel that of american abstraction, despite the fact that in 1950, having already met Robert Rauschenberg, he realized that the painting surface interested him as a surface on which no physical visual experience takes place except a working progress of execution. 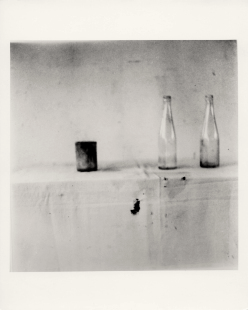 Twombly is an adherent to gestural painting and is opposed to every notion of representation.

His 1953 reference to automatic writing seems to have liberated him from every cultural consideration.

His pictorial “image” corresponds to an inner spirit that has led him to those sacred childhood years when the child, drawing and scribbling, shifts his thoughts away from any speech and image.

The gestural trace becomes the representation of the artist’s thinking, the absence of signifier is replaced by the presence of being. The non-signifying thought is for the artist the first stage before the crystallization, before and culture convention.

At the time, young Twombly was moving in search of the essence, the invisible, which would lead him to what Jean-Jacques Rousseau calls “perfect Harmony with the nature”.[1] Motherwell’s theoretical exploration (for him art had to spark contemplation of fundamentally concerns life, the “essence”)[2] led Twombly to continue his investigations into creative activity at the expense of the illusion.

His image records his gestural movements, setting up a personal relationship between the image and the product. The result is that the “scribblings” of this period function as starting points to artistic creation. Twombly has mentioned his specific concerns for the pleasure in what takes place, thereby literally impelling the instinctual dynamism of his gestural movement to reveal a forgotten memory.

With his reference to automatic and gestural writing, with the vibrancy of his gesture, with his intense scribblings, Twombly goes beyond Pollock’s chicken scratches and drippings. Pollock, in his denial of al personal history, all experience and know-ledge, created a tabula rasa in his desire to approach the collective subconscious. 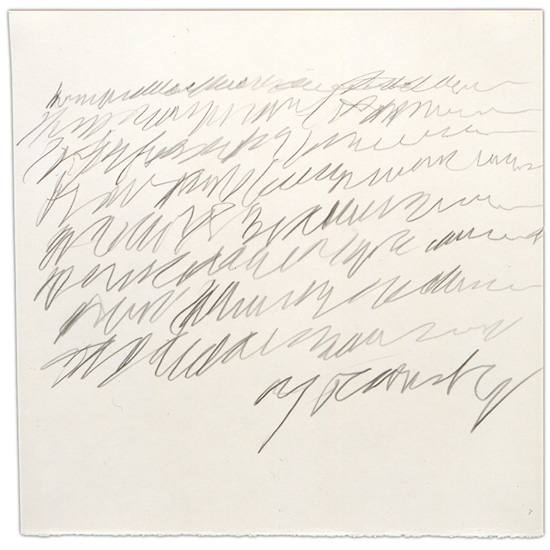 In contrast, Twombly does not categorically deny the connection between consciousness and the mechanisms of subconscious. For him the touch of the hand-via the itinerary of thinking and surface, the base of thinking- is fundamental, since it brings creative thinking into direct contact with human life.

He neither seeks to express nor to represent a reaction or an emotion; he simply uses the picture surface as the base for all the movements of his mental life and thinking, so the gestural writing becomes the means of expression that allows him to leave his traces.

Twombly’s 1975 installation in Rome confronted the organic union of past and present that is history. With a cultural tradition, “be it about an idea of God, be it about an idea of man” the Old World,linked to the consciousness of historical time, “emphasizes” for the artist the violence of time through historical monuments that are nothing but “ a degenerate and distorted past”.[3]

Compared with poetry of the monument and ruins, the reference created by their decay turns them into “objects”.[4] Offered up to his gaze, they are testaments to the absence of the sacred. Works of man, they demonstrate the dissolution of form, and abandoned, secluded, reintegrated into nature, they end up being constant reference for Cy Twombly.

Roma (1957) does not portray the city, but takes on an end in itself as writing. “Words have the power to make thinks disappear, to make them appear as disappeared, appearance which is that of a disappearance, presence that returns to absence…”[5] 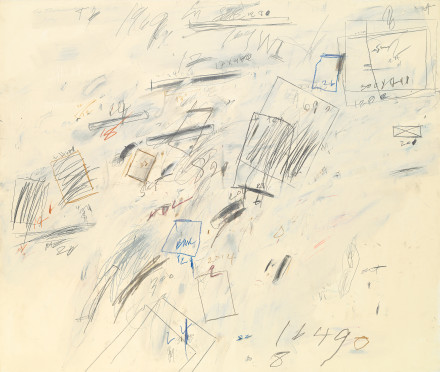 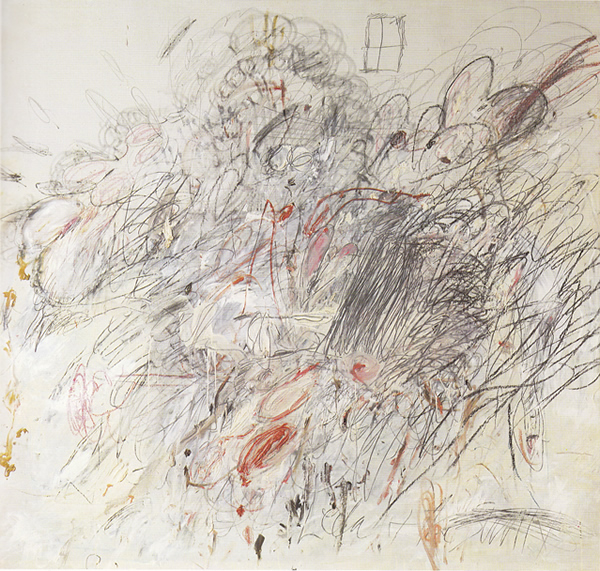 In other words, one could regard the image perceived and represented by Twombly, vested with time and experience, as not the same as the one the ancients perceived.

The artist apprehended what knowledge dictated to him- which is nothing more than a piecemeal knowledge of the reality presented- so that the ruins, the inscriptions of the funerary steles, worn by time, leaving few traces of their former meanings, appear in his work without any near past. At last visual language comprises the painting’s main image, so that even the dim shadow of the past appears via the glow of the pictorial image.

As substantial change appeared in his work with use of alphabet script, since up until then his writing was intended to describe personal experience.

By using words as monads reflecting the nature of words, Twombly clarifies language proper as the work, allowing the person, the artist, to appear in a second reading.

The period of the seventies has been characterized by Roland Barthes as the manifestation of “a remembrance, an irony, a posture”; by Roberta smith as a determination to render life through Greco-Roman mythology. Neither of them, however, elaborated on the direct relationship between the artist and the myth.

According to Levi-Strauss, “myth is always the discourse on the origin, the story of the foundation”[6] where legitimacy and arbitrariness, reality and images blend without any particular distinction to define modern man just as easily as they do the man of antiquity and his gods. But in the telling, it dissembles and in this way is unable to reconstruct a “representation that is already distance, loss”.[7]

Twombly’s consequent return to myths, to the genesis of the world, produced a loss of the notion of the primordial myth. Narcissus, Venus, Dionysus, Leda are subjects in which the artist, though a process other than that of imitation, effects a dual reading: one of painting, one of the text.

In Mythologie, Roland Barthes notes that each “object” is open to society’s appropriation and can pass from a real historical state into an oral state, and thus come back to “life”.[8] The object in this case, the myth of Narcissus, appropriated from the artist’s imagination, returns via a personal way of seeing. Distance from all iconography, the artist sets the viewer free to alter the original myth, since his writing defines but an idea.

“Writing is added to speech, affixed like an image or a representation, “writes Derrida, so that, presented as a mirror of speech, it compromises the representation of immediate thought. The result lies in the determination of (indefinite) speech as myth, defining it by plastic means or writing. With the creative act, Twombly detached the myth from the “sacred space where it is preserved”,[9] there be creating in a visual space his own other “myth”, that of the work.

The “myths”, such as Dionysus (1975), Venus (1975), Pan (1975), Orpheus (1975), detached from their identities, are surrendered to a personal appropriation of their meaning that differs from that of classical painting, whose aim is the representation of the “real”. 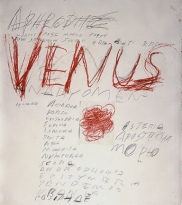 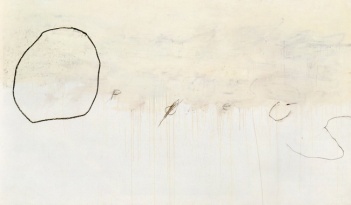 Classical painting structures its language by the following concepts: the signifier (which encompasses figures, object, forms, lines, colors, perspectives, etc.), the referent (meaning that real to which a similar organization refers) and the signifiant (the symbolic speech that unites the signifier to the referent). These are concepts in which there is a subject of writing and reading that decodifies the picture’s code, referencing a story  (religious, secular, etc.). This painting has a constant relationship to the sign, for the pictorial sign is permanently in reference to the real (sign), and in this manner guides thinking with the assistance of the pictorial signifier towards something else, which is the narrative. But knowing that “the most faithfully represented thing is no longer present”,[10] we find ourselves faced with not only a probable change of narrative, but also with an absence of the thing that the painter initially wanted to represent.

Finally, by attempting with visual materials to ignore this absence, classical painting ended up referring with the aid of the signifiant to a sign other than the primary one. Its language since then has referenced a religious or other type of thinking in which speech, as in language, is Being.

Thus we observe that this visual language references the great absence that takes the form of God. The thing that classical painting presents, says Marc Devade, is that which is absent.

In other words, the classical picture doesn’t only exist in the space of its essential representation (pictoral object-real object), but through its visual code it evokes a significative process that impels an interpretation, a “ becoming” text. Just as religion is the interpretation of the Divine Word, likewise visual writing in classical painting refers to a symbolic word; it guides us to what existed in the beginning, to the Divine Word. 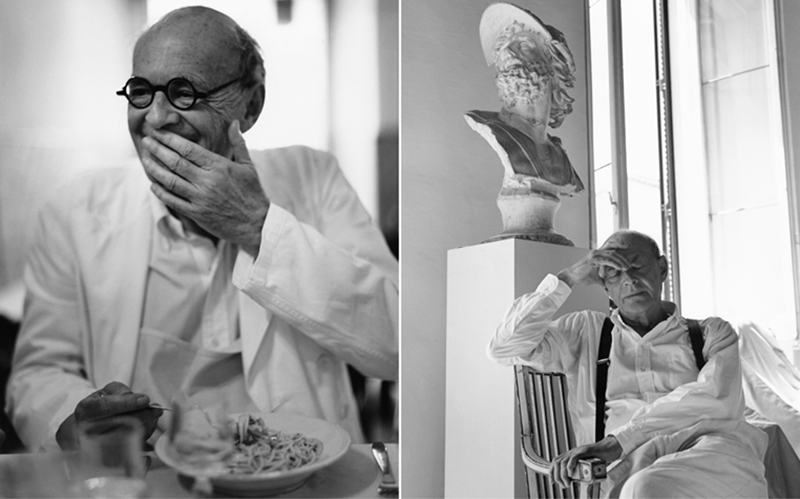 Thus Cy Twomly writes names, sometimes rapidly, sometimes nonchalantly, illegibly or not, in an attempt to bring into the space of painting those who are essentially absent. With no reference whatsoever to the real, the artist demonstrates that writing, his writing, helps him to that non-real, other world of Gods. This time it is not through a pictorial sign that the painter wants to narrate, as occurs in classical, but through the letters that directly reference speech.

In contrast to what occurs in classical painting, Twombly has no need of the referent, of a real, because on the one hand, the essential referent as sole reality is the word itself, and on the other, his writing in the form of line that transforms into linear phonetic notation-uniting vocal sounds-references that which preexisted: the Gods.

So if his writing is clumsy, nonchalant, and/or even calligraphic, it does not hinder what he himself wishes to present within the pictorial space: speech, sound, the beginning.

«Each line is inhabited by its own history, it does not explain, it is the event of its own materialization”[11], Twombly remarks. And is detaching the line from the word he frees it from the sign, from the language, in an effort to also utilize and create the pictorial space.

His writing, whether lectical or not, “in ceasing to be the prose of the world”,[12] become free. By producing the visual autonomy of the signs, the artist structures the space in the work around what truly compromises it: words, letters.

As opposed to the Futurist, for who writing had to be readable since it formed the basic element of equilibrium between the visual signs and the ideograms in the work, Twombly appropriating writing, infiltrates the space of graffiti art, where words comprise the plastic syntheses of production of the work. The point of reference in his creative act is not the liberation of words so as approach the immediate language of reality, but the appraisal of the plastic writing behind the names, behind the words.

“Of writing, Twombly keeps the gesture, not the product”[13] In the end, it is the artist’s gesture does not divulge the act of painting (translator’s note: in Greek to paint is a synthesis of to live and to write), since gesture is a pause, an interruption, and not the projection of the self, as we presume. 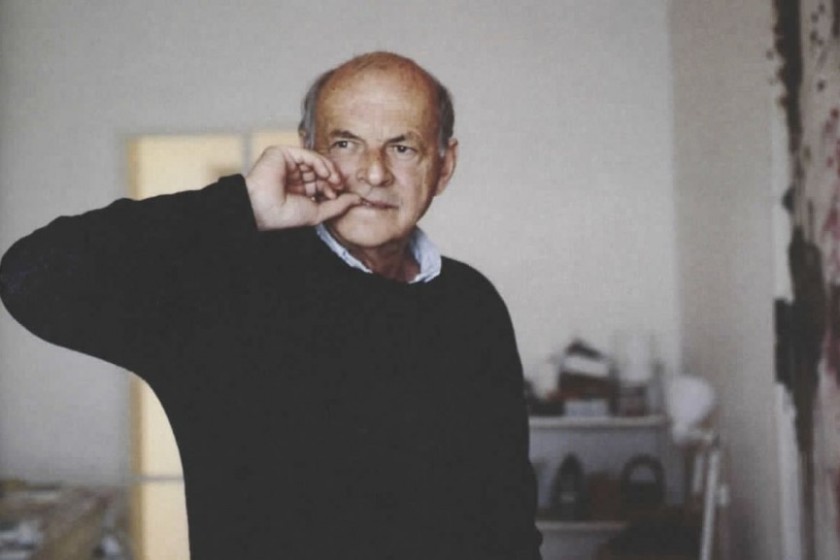 On this very point also lies the reason for its existence; the significance of the instantaneous painting act registers the moment in time when it acts, not earlier, not later.

Before the “arrival” of the final moment, the gesture is the sole manifestation of the artist’s being, noting however, in its passing the stoppage of time of the past- in other words, death. As a result, the writing exposed to the eyes does not contain life, nor does it manifest the trace of the painting act. What is left of this gestural act is the work itself. By means of plastic syntheses, it constitutes the sole presence.

Cy Twombly’s art has no wish to be either dedication, nor translation of an idea or sentiment: 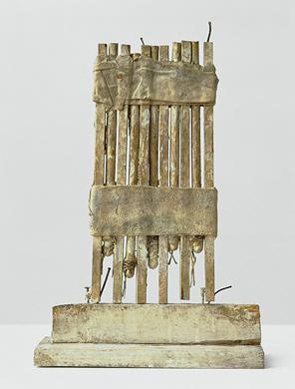 * Dorothea Konteletzidou is an art historian, Phd of theory of art 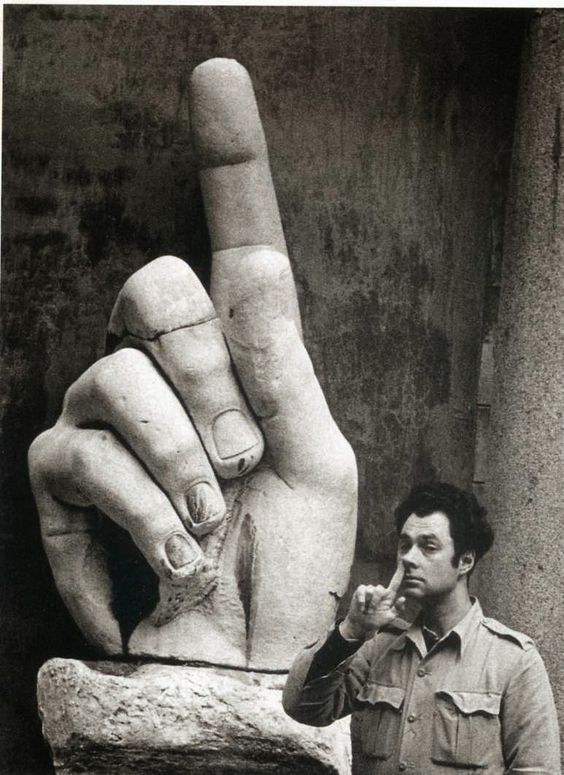